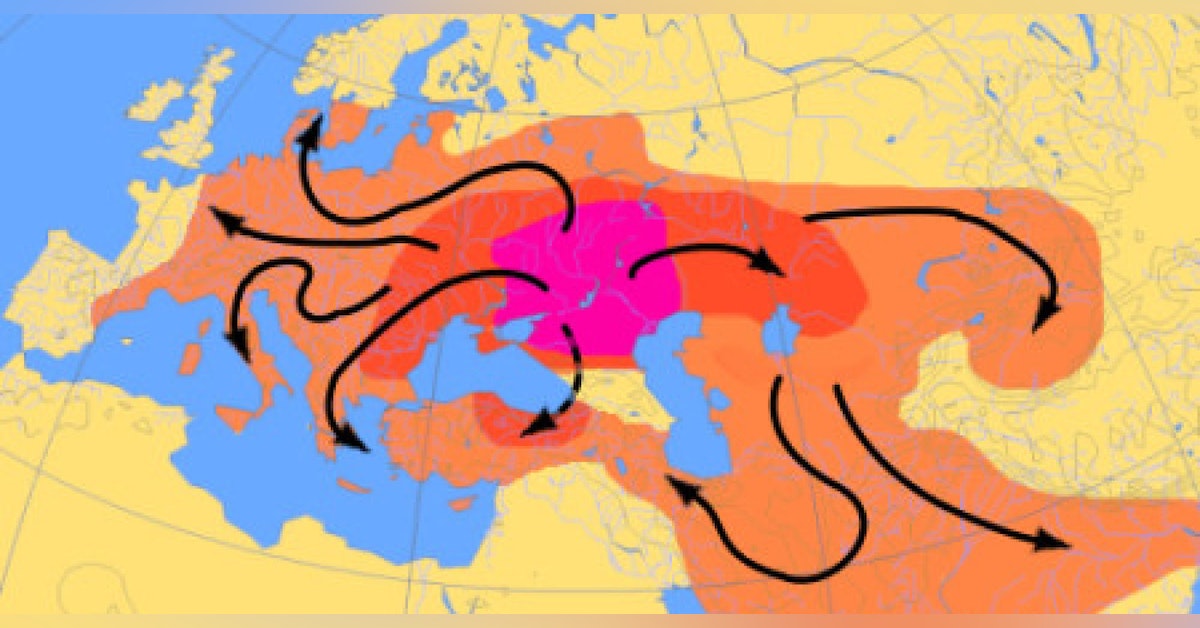 The Indo-Europeans are on the move and heading to Western Europe, bringing with them war, horses and apocalypse.

The Indo-Europeans are on the move and heading to Western Europe, bringing with them war, horses and apocalypse.

Last time we talked about the monument-producing complex cultures of Europe. Today, we will see their collapse in the face of migrating waves of Indo-Europeans. It is these migrating peoples, and their cultures and languages that will dominate Europe from the fourth millennium BCE to present.

So…who were the Indo-Europeans? That’s not the easiest question to answer since these peoples were not monument builders and had no written language. Thankfully, linguists have been able to compare the many Indo-European languages in order to find commonalities, which in turn tell us something about their culture. For example, we know the Indo-Europeans were pastoralists, since their language had no term for ‘autumn’ which is the growing season and thus their food primarily came from domesticated animals and hunting. Furthermore, their language had words for ‘clan,’ ‘warrior’ and king, alongside other societal ranks, showing that they were hierarchical. Further word reconstructions show that these people were probably patriarchal as well, due to their admiration for warriors and masculinity. Where archeology has produced important, but limited knowledge on these peoples, ethnolinguistics has filled in important gaps.

Here’s what we know about the Indo-Europeans. They originated in the Caucasus Mountain region though where exactly is disputed. While the European descendants of Indo-Europeans are often referred to as Caucasians, many Indo-Europeans ventured south into Asia, where they were hugely impactful in India, hence the term ‘Indo-European.’ Sometime around 3,000 BCE they entered what is now Turkey, Iraq, Iran and northern India. While much of the racial make-up and cultural influence of these peoples has faded away, there are still remnants in these modern countries. For example, the nation ‘Iran’ literally translates to ‘Land of the Aryans,’ a term used by Iranians and Indians that refers to these lighter-skinned early invaders, and which doesn’t have the same racist overtones that it does in the Western world; thank you Nazis for ruining it. To this day northern Indians are lighter-skinned than their southern counterparts, in part because of the Indo-European conquest of the north. While the Indo-European invasions in Iran and India had incredible consequences for these countries, this is a French history podcast, so we’ll just leave it at that.

Perhaps their greatest achievement was the early domestication of the horse, something which allowed for travel across great distances and rapid reinforcement in battle through the use of war chariots. Domesticated war-horses, combined with their berserker warriors are the reason why these peoples would successfully invade Europe, Iran and northern India.

The Indo-Europeans were a highly spiritual people. Architecture was largely beyond them, so they left behind no large monuments, though they did leave behind stone stelae. What we know about their religion is largely guesswork based on finding similarities in later Indo-European religions such as Zoroastrianism, ancient Greco-Roman beliefs, Celtic and Germanic myths, and early Hindu Vedas. Based on anthropological writing, we can deduce at least six major beliefs that Indo-Europeans possessed. First, they believed in a dualistic universe divided between good and evil, day and night, hot and cold, material and spirit. Second, while they were polytheists, there was usually a paternal sky deity who ruled over everything, and lesser gods were either subservient to or manifestations of the paternal sky deity; with the exception of the Evil One. Third, they believed in animal sacrifice as a ceremonial manifestation of their piety. The usual sacrifices were cattle and horses, which were their most prized possessions. Fourth, they believed in an afterlife, and that one’s position in the afterlife depended on actions taken in this life. Furthermore, this afterlife had to be reached by crossing a river, usually with the help of an old man, a belief that is part of the early Hindu Vedas, Greek and Celtic mythology and Norse mythology, although the Norse story omits the old man as a guide to the underworld. Fifth, Indo-Europeans had hero-veneration. These heroes, which were either great men or gods, themselves usually male because Indo-Europeans were a masculine culture, became great by defeating a monster in combat, usually some giant reptile, either a lizard, serpent or dragon.

Sixth, and most interestingly to me: Indo-Europeans were obsessed with an apocalyptic ending of the world. Indo-Europeans believed that a final battle will be waged between the benevolent, paternal sky-deity and his evil counterpart and cause the ending of the world, a final judgement of souls, and lead to a new creation. In Norse mythology this event is known as Ragnarök, in which the trickster-god Loki, played by Tom Hiddleston, will lead the giants and colossal monsters in a war against the Asgardians. The sun and stars will vanish, the world will turn cold, and the giant Surtur will engulf the Nine Worlds in flames. When the fires die out, Baldr, son of the all-father Odin, will be reborn, and lead the surviving gods and humans in the recreation of a new, revitalized world.

In Zoroastrianism, the world will end with a 3,000-year period of sorrow, during which the heavenly bodies go dark and the world is seized by an unnatural cold. The father deity Ahura Mazda will impregnate a virgin and the child Saoshyant will defeat the all-evil Angra Mainyu. After defeating the evil one, Saoshyant will judge the dead and create a new world.

In Hinduism, the world will end in a time of chaos and violence. Out of this decrepit world Kalki, avatar of Vishnu, will lead the righteous in combat with the evildoers. After this, the universe will be born anew.

Interestingly, Greek mythology deviates from this narrative slightly by having the apocalypse as a past event, rather than a future one. In Greek mythology this is the titanomachy, a 10-year world war between the ruling titans, and the revolting gods. In this conflict all-father Zeus leads the mostly righteous forces against the titans. When the war ends the gods then recreate the world.

This belief in a climactic battle to decide the fate of the universe is an important one for multiple reasons: one, this justifies violence against the ‘wicked’ as a means of purification and feeds into the warlike nature of the Indo-Europeans. Second, this belief holds that the world will be destroyed and replaced by a better one, which meant that a permanent afterlife was more important than the temporary existence of our world.

After a small minority of Indo-Europeans began settling in Asia, the majority headed west into Europe in the mid-4th millennium BCE.  By the 3rd millennium BCE, they arrived in France and confronted the indigenous populations. It is hard to say just how much mixing with local populations was peaceful and how much was violent, but considering the prowess for war that the Indo-Europeans possessed, and that fact that most if not all Old European languages went extinct, historians’ best guess is that Indo-Europeans were not settlers of Europe, but conquerors. Just like that, the indigenous European cultures disappeared into the dustbin of history, as this new group of people became the masters of Europe.

The arrival of Indo-Europeans roughly corresponds to the shift from the Mesolithic period, to the Neolithic, or New Stone Age. The Neolithic period saw an increase in towns, more sophisticated pottery, the use of polished stone tools, as opposed to crude stone tools, and the first use of crude metals. Now I have to stop here and talk a little bit about periodization, which is incredibly problematic. Archeologists and anthropologists continue to debate when the Mesolithic ended and the Neolithic began for two main reasons. The first has to do with material evidence. Many artifacts from 4 to 10 thousand years ago are in terrible condition, and so it’s hard to judge what these may have looked like in their original states. Determining how intricate and how complex these were is a struggle and is why it is often difficult to claim that one culture achieved a more complex form of tool-making than another across time. Even if that can be proven, the question then arises how complex does a tool have to be to be considered Neolithic as opposed to Mesolithic.

Then there’s the second problem with dating, and that is that technological innovation varied greatly by region. I think the best way of understanding this is to think about a quote by one of science fiction’s greatest authors, William Gibson. Gibson is famous for saying, “The future is already here — it’s just not very evenly distributed.” This is one of my favorite quotes because it is so simple yet contains such rich complexity. Essentially, Gibson makes the point that ‘the future,’ or technology, is not just a product of time but geography and those are interrelated. For example, if you visit Tokyo today you will be amazed at their technological innovation. The world’s most reliable bullet trains transport millions to a metropolis of 38 million people, where virtual reality and advanced robotics are among the most advanced in the world. Now, imagine you took a plane and arrived in Ho Chi Minh city in Vietnam. You’d still find cell phones and wi-fi, but there wouldn’t be the bullet trains, the subway, the robots, and much of the cutting edge technology. Going to Ho Chi Minh city might be like travelling to Tokyo in the early 2000s. Now, imagine if you travelled from the city out into rural Vietnam, where those working the rice fields make roughly one dollar a day, and much of their work is done by hand using simple wood and steel tools. While rural Vietnamese may have cellphones and access to a bus, much of their daily rituals are similar to what you’d expect hundreds of years ago.

This geographical divide in technology is certainly true of every society. I currently live in Houston, which is a hotbed for technological development, as a headquarters of some of the world’s major oil companies and NASA. If one drives out of Houston and into rural Texas it certainly feels like going back in time.

Thus, Gibson’s quote “The future is here, it’s just not very evenly distributed” is a good way of summarizing why it is so difficult for anthropologists to say when the different periods of human history began and ended. Anatolia, or what we now call Turkey, had probably entered the Neolithic around 10,000 BCE. France probably did so in the 4th millennium BCE, while Britain took even longer. By the time France was moving into the Neolithic, Egypt had already moved into the Copper Age. While early French cultures were using refined stone tools and making simple towns, Egypt already had pyramids, centers of law and justice, temples and a complex clergy and religious rituals, and a whole host of technological and cultural innovations that France wouldn’t possess for another few millennia. When looking at the past periodization is often relative, which is why one society can move on to the next ‘age’ while another is only just starting it.

Around 3000 BCE France left the stone ages altogether, as early French inhabitants developed copper tools. This metals revolution changed the face of the world as those cultures with copper, and especially bronze, weapons could easily outmatch their opponents who were armed with mere stone. The result was a period of war as societies with metal weapons dominated those without, building even more complex societies and subduing those without the new advanced weapons. Next time, we’ll go through the Copper Age and the Bronze Age and its momentous impact upon France.

Mallory, J. P. In search of the Indo-Europeans: language, archaeology and myth, 1989.