Declaration of the Rights of Woman and of the Female Citizen, read by Dr. Emma Kavanagh 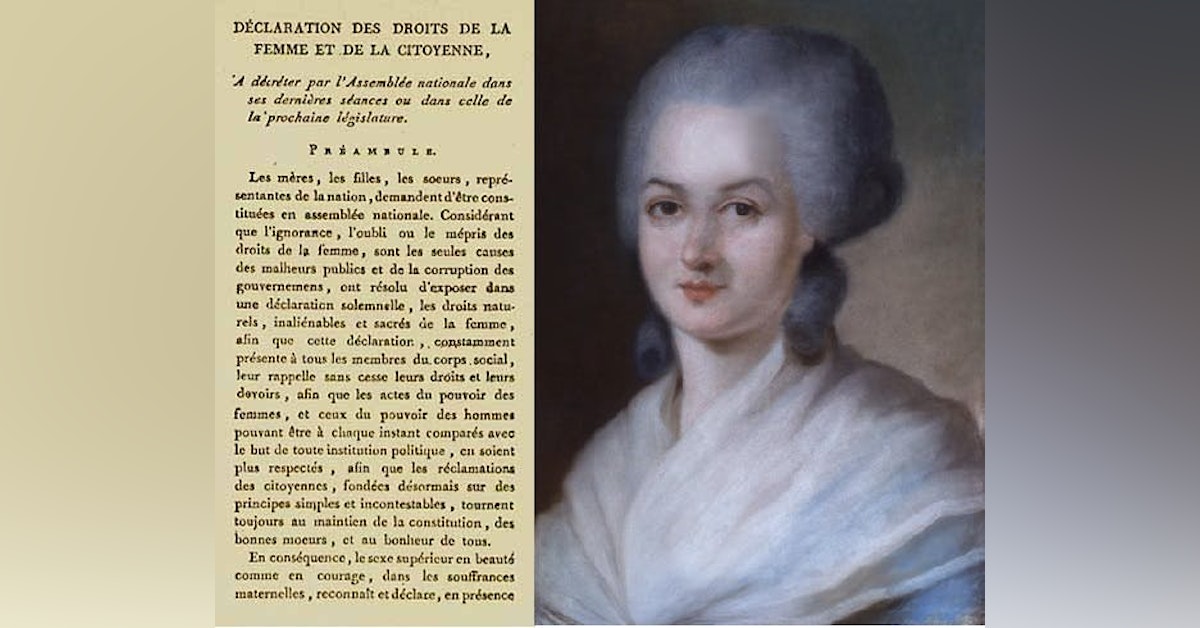 Dr. Emma Kavanagh reads Olympe de Gouges' 'The Declaration of the Rights of Woman (September 1791),' a classic feminist document and critique of the RIghts of Man and of the Citizen.

Dr. Emma Kavanagh reads Olympe de Gouges' 'The Declaration of the Rights of Woman (September 1791),' a classic feminist document and critique of the RIghts of Man and of the Citizen.

Olympe de Gouges, The Declaration of the Rights of Woman (September 1791)

Mothers, daughters, sisters, female representatives of the nation ask to be constituted as a national assembly. Considering that ignorance, neglect, or contempt for the rights of woman are the sole causes of public misfortunes and governmental corruption, they have resolved to set forth in a solemn declaration the natural, inalienable, and sacred rights of woman: so that by being constantly present to all the members of the social body this declaration may always remind them of their rights and duties; so that by being liable at every moment to comparison with the aim of any and all political institutions the acts of women’s and men’s powers may be the more fully respected; and so that by being founded henceforward on simple and incontestable principles the demands of the citizenesses may always tend toward maintaining the constitution, good morals, and the general welfare.

In consequence, the sex that is superior in beauty as in courage, needed in maternal sufferings, recognizes and declares, in the presence and under the auspices of the Supreme Being, the following rights of woman and the citizeness.

1. Woman is born free and remains equal to man in rights. Social distinctions may be based only on common utility.

2. The purpose of all political association is the preservation of the natural and imprescriptible rights of woman and man. These rights are liberty, property, security, and especially resistance to oppression.

3. The principle of all sovereignty rests essentially in the nation, which is but the reuniting of woman and man. No body and no individual may exercise authority which does not emanate expressly from the nation.

4. Liberty and justice consist in restoring all that belongs to another; hence the exercise of the natural rights of woman has no other limits than those that the perpetual tyranny of man opposes to them; these limits must be reformed according to the laws of nature and reason.

5. The laws of nature and reason prohibit all actions which are injurious to society. No hindrance should be put in the way of anything not prohibited by these wise and divine laws, nor may anyone be forced to do what they do not require.

6. The law should be the expression of the general will. All citizenesses and citizens should take part, in person or by their representatives, in its formation. It must be the same for everyone. All citizenesses and citizens, being equal in its eyes, should be equally admissible to all public dignities, offices and employments, according to their ability, and with no other distinction than that of their virtues and talents.

7. No woman is exempted; she is indicted, arrested, and detained in the cases determined by the law. Women like men obey this rigorous law.

8. Only strictly and obviously necessary punishments should be established by the law, and no one may be punished except by virtue of a law established and promulgated before the time of the offense, and legally applied to women.

9. Any woman being declared guilty, all rigor is exercised by the law.

10. No one should be disturbed for his fundamental opinions; woman has the right to mount the scaffold, so she should have the right equally to mount the rostrum, provided that these manifestations do not trouble public order as established by law.

11. The free communication of thoughts and opinions is one of the most precious of the rights of woman, since this liberty assures the recognition of children by their fathers. Every citizeness may therefore say freely, I am the mother of your child; a barbarous prejudice [against unmarried women having children] should not force her to hide the truth, so long as responsibility is accepted for any abuse of this liberty in cases determined by the law [women are not allowed to lie about the paternity of their children].

12. The safeguard of the rights of woman and the citizeness requires public powers. These powers are instituted for the advantage of all and not for the private benefit of those to whom they are entrusted.

13. For maintenance of public authority and for expenses of administration, taxation of women and men is equal; she takes part in all forced labor service, in all painful tasks; she must therefore have the same proportion in the distribution of places, employments, offices, dignities, and in industry.

14. The citizenesses and citizens have the right, by themselves or through their representatives, to have demonstrated to them the necessity of public taxes. The citizenesses can only agree to them upon admission of an equal division, not only in wealth, but also in the public administration, and to determine the means of apportionment, assessment, and collection, and the duration of the taxes.

15. The mass of women, joining with men in paying taxes, have the right to hold accountable every public agent of the administration.

16. Any society in which the guarantee of rights is not assured or the separation of powers not settled has no constitution. The constitution is null and void if the majority of individuals composing the nation has not cooperated in its drafting.

17. Property belongs to both sexes whether united or separated; it is for each of them an inviolable and sacred right, and no one may be deprived of it as a true patrimony of nature, except when public necessity, certified by law, obviously requires it, and then on condition of a just compensation in advance.

Women, wake up; the tocsin of reason sounds throughout the universe; recognize your rights. The powerful empire of nature is no longer surrounded by prejudice, fanaticism, superstition, and lies. The torch of truth has dispersed all the clouds of folly and usurpation. Enslaved man has multiplied his force and needs yours to break his chains. Having become free, he has become unjust toward his companion. Oh women! Women, when will you cease to be blind? What advantages have you gathered in the Revolution? A scorn more marked, a disdain more conspicuous. During the centuries of corruption you only reigned over the weakness of men. Your empire is destroyed; what is left to you then? Firm belief in the injustices of men. The reclaiming of your patrimony founded on the wise decrees of nature; why should you fear such a beautiful enterprise? . . . Whatever the barriers set up against you, it is in your power to overcome them; you only have to want it. Let us pass now to the appalling account of what you have been in society; and since national education is an issue at this moment, let us see if our wise legislators will think sanely about the education of women.

Women have done more harm than good. Constraint and dissimulation have been their lot. What force has taken from them, ruse returned to them; they have had recourse to all the resources of their charms, and the most irreproachable man has not resisted them. Poison, the sword, women controlled everything; they ordered up crimes as much as virtues. For centuries, the French government, especially, depended on the nocturnal administration of women; officials kept no secrets from their indiscretion; ambassadorial posts, military commands, the ministry, the presidency [of a court], the papacy, the college of cardinals, in short everything that characterizes the folly of men, profane and sacred, has been submitted to the cupidity and ambition of this sex formerly considered despicable and respected, and since the revolution, respectable and despised. . . .

Under the former regime, everyone was vicious, everyone guilty. . . . A woman only had to be beautiful and amiable; when she possessed these two advantages, she saw a hundred fortunes at her feet. . . . The most indecent woman could make herself respectable with gold; the commerce in women [prostitution] was a kind of industry amongst the highest classes, which henceforth will enjoy no more credit. If it still did, the Revolution would be lost, and in the new situation we would still be corrupted. Can reason hide the fact that every other road to fortune is closed to a woman bought by a man, bought like a slave from the coasts of Africa? The difference between them is great; this is known. The slave [that is, the woman] commands her master, but if the master gives her her freedom without compensation and at an age when the slave has lost all her charms, what does this unfortunate woman become? The plaything of disdain; even the doors of charity are closed to her; she is poor and old, they say; why did she not know how to make her fortune?

Other examples even more touching can be provided to reason. A young woman without experience, seduced by the man she loves, abandons her parents to follow him; the ingrate leaves her after a few years and the older she will have grown with him, the more his inconstancy will be inhuman. If she has children, he will still abandon her. If he is rich, he will believe himself excused from sharing his fortune with his noble victims. If some engagement ties him to his duties, he will violate it while counting on support from the law. If he is married, every other obligation loses its force. What laws then remain to be passed that would eradicate vice down to its roots? That of equally dividing [family] fortunes between men and women and of public administration of their goods. It is easy to imagine that a woman born of a rich family would gain much from the equal division of property [between children]. But what about the woman born in a poor family with merit and virtues; what is her lot? Poverty and opprobrium. If she does not excel in music or painting, she cannot be admitted to any public function, even if she is fully qualified. . . .

Marriage is the tomb of confidence and love. A married woman can give bastards to her husband with impunity, and even the family fortune which does not belong to them. An unmarried woman has only a feeble right: ancient and inhuman laws refuse her the right to the name and goods of her children’s father; no new laws have been made in this matter. If giving my sex an honorable and just consistency is considered to be at this time paradoxical on my part and an attempt at the impossible, I leave to future men the glory of dealing with this matter; but while waiting, we can prepare the way with national education, with the restoration of morals and with conjugal agreements.