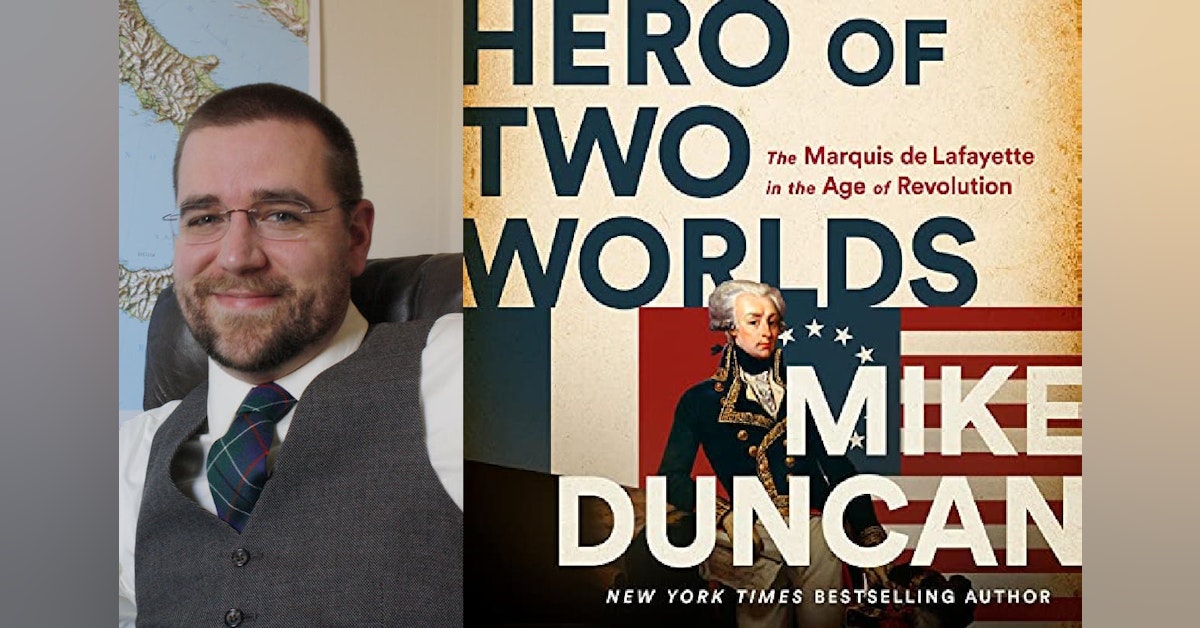 The legendary Mike Duncan talks about his book Hero of Two Worlds and the incredible life of Lafayette.

My next guest needs no introduction but I’ll give him one anyway. Mike Duncan is one of the most influential and popular history podcasters in the world. His smash-hit series The History of Rome, which ran from 2007-2012, traced the history of the Eternal City from its founding until its fall in 476. After finishing the show he released the book The Storm Before the Storm: The Beginning of the End of the Roman Republic, which became an international bestseller. He currently is finishing his second podcast series Revolutions, with each season covering a different historical revolution. His new book and the subject of today’s episode is Hero of Two Worlds: The Marquis de Lafayette in the Age of Revolution, which debuted in the top 5 of the New York Times and Amazon.com’s non-fiction bestseller lists. His work has been the inspiration for many podcasts, including this, so I am so delighted to have him on the show.

Gary: Thank you so much for being on the show, Mike Duncan. This is such a special show. First off, because you’re here, it’s obviously special. And also this is the first episode that I have done since becoming a doctor as I actually defended successfully a couple of weeks ago. So, this is quite an opportunity to celebrate, and it’s the best way I can think of to celebrate. So, thank you so much for being on the show today. We are talking about your book Hero of Two Worlds and the Marquis de Lafayette. Over your career, covering the entire history of classical Rome to revolutions from the 1600s to the Russian Revolution, you become acquainted with some of the most fascinating characters of all time. Of all the people you could have written about. What made you choose the Marquis de Lafayette?

Mike: Well, it grows organically out of having done Revolutions, and it was sort of where I was at in Revolutions when it came time for me to write my second book because my first book, The Storm Before the Storm, did pretty well. And the publisher came around and said, “OK, well, what are your ideas for your next book?” And at this point, this is right when I was ending the sixth season of the show. And for, you know, if you’re not acquainted with the show, each season is a different discrete historical revolution. But I move chronologically through history, and the sixth season was about the Revolution of 1830, and Lafayette, as an old man, plays a very prominent and important role in the Revolution of 1830, as we all know. But then that by that point in season six, I was looking back on it. It was like this guy showed up as a 19 year old in season two, played a pretty prominent role in the Continental Army and in the American Revolution, then went on into the French Revolution and played a very major, like a much bigger role than even I anticipated him playing in the French Revolution because I knew he was around. I knew he was a part of the National Guard, but I think really 1789, 1790, 1791 Lafayette to be one of the most important and influential figures in the whole revolution. And then as I move forward, I’m talking about Spanish-American independence, and suddenly I’m reading this biography of Simon Bolivar in correspondence with old Lafayette, because he looks up to Lafayette. And then in trying to prepare for the 1830s, I find him involved in these secret underground Carbonari conspiracies, these liberal revolts in the early 1820s. And by this point, Lafayette had just been around so much. He’s around in the show more than anybody else. He appears in more episodes, he appears in a more series than any other figure. And so by the time he asked, “What would you like to write your next book about?” I was like, “I have this guy who’s around all the time and I can’t get rid of him. And I would really like to go back to the beginning of his life and just retell the whole story of his life from birth, but then also re-walking through all of these events the second time in the American Revolution, the French Revolution, the Revolution of 1830 and walking through this 50 year period, which is of humongous importance not just for European history, but Atlantic history and world history generally.” And those things all came together. And then, of course, when I presented it, everybody was like, “Oh, the guy from Hamilton,” you can absolutely write a book about the guy from Hamilton. And here we are.

Gary: And, you know, just because there’s so many, I mean, obviously, there are some disadvantages because there are a lot of podcasts because to some extent you’re competing with them. Although I don’t think necessarily because I do think that when people listen to a longform podcast like the history of Rome, they start to look for other long-form podcasts. So we’re not quite competing. But also one thing that I think is so great about there being so many podcasts is that there is such a great community out there. I mean, I have personally, I interact with hundreds of different podcast on various things and in the history. I follow hundreds of different history, podcasts and also the the podcast, which I don’t follow if there’s anyone out there who has a smaller podcast. The only reason why I don’t follow you on Twitter is just because I don’t want my entire feed to just be, you know, a jumble. I want to be able to have close connections with people, but that doesn’t mean I don’t or won’t interact. I mean, I’m a pretty approachable person. So I mean, the the friendships that I’ve made with people from podcasting have really been incredible. So yeah, I mean, just just joining it for the community is great.
Mike: Yeah, it’s a it’s a glorious thing. And like I say, if you have the passion and want to do it, I would encourage you to just do it.
Gary: Well, thank you very much for this conversation, Mike. The this episode has been fantastic and so has your book Hero of Two Worlds. The Marquis de Lafayette in the Age of Revolution is incredible. I cannot recommend this book more highly. It is the product of a master storyteller who has captivated millions over the past 15 years that is entirely accessible to a lay person, while simultaneously it is meticulously researched and an invaluable read for scholars. If you haven’t already checked out the book, then what are you doing? Get the book! Get it mainly. Yeah, and particularly Mike, I think has done. I mean, Mike is doing so many amazing things, pioneering so many things. I really appreciated how you were encouraging your followers to get it from local bookstores, support your local bookstores and get this book. So again, thank you very much for being on the podcast, Mike.
Mike: Thank you very much. Yes, and Jeff Bezos has enough of our money. Let’s give it to other people.