The Strasbourg Dancing Plague of 1518 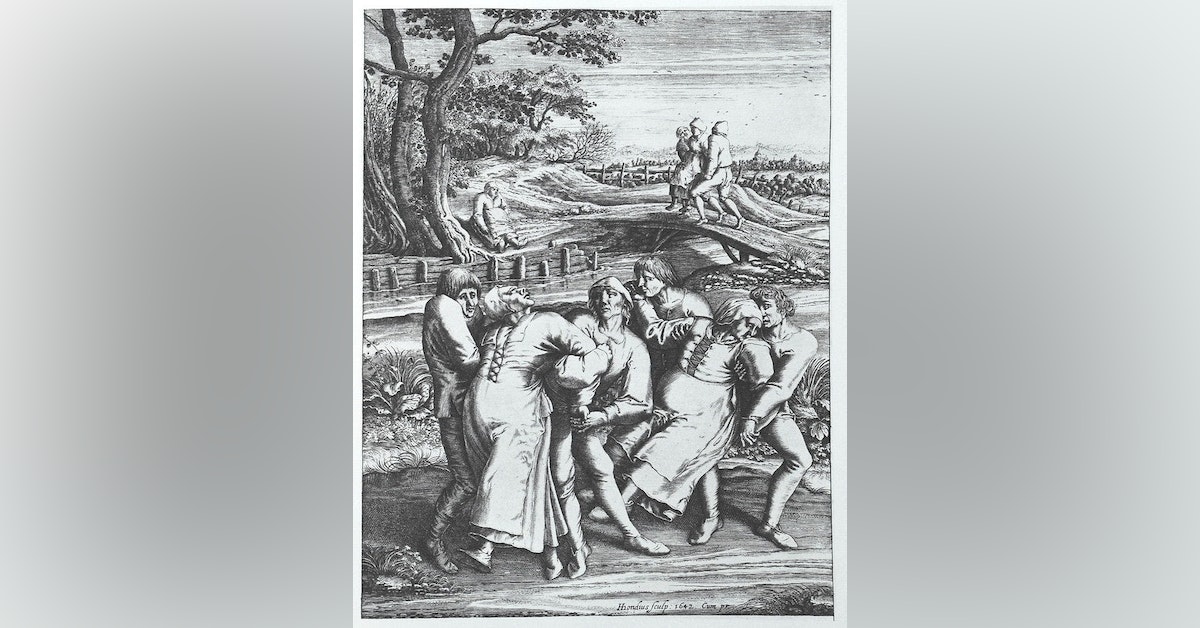 A Halloween episode about a lethal dance mania in Strasbourg.

There ain’t no dance party like a medieval dance party because a medieval dance party don’t stop. Ever *scary sound effect*. During the Late Medieval and Early Renaissance periods chroniclers across Europe recorded peasants dancing uncontrollably for days. The largest and most famous of all these was the Dancing Plague of 1518 in Strasbourg. This all began on a hot day in July, when Frau Troffea started dancing in the city’s square. There was no music, no scheduled festival or event. Without warning Troffea began gyrating, twirling and jerking uncontrollably. Even as night fell she kept dancing, continuing into the following day. As if her antics were not strange enough, soon others joined her. By August up to 400 people danced without ceasing in the square, in streets and in alleys, some until they collapsed or even died of stroke or heart failure.

Physicians and priests quickly grew concerned as they watched their fellows succumb to the madness. Men of science claimed that the dancing was caused by hot blood and that the ill people would eventually cease their silliness and recover. To this end the city arranged for professional dancers, accompanied by drummers and musicians, dance alongside the afflicted, giving some coordination to the spasmodic movements of the crowd, while, hopefully, bringing them to a stopping point. Even when the music stopped and the professional dancers stood still, those infected continued their hypnotic movements. When science failed, the burghers turned to religion. Fearing that some devilry was afoot, the city government banned music, dancing and ordered a public penance. Even this did not end the epidemic. As a last-ditch effort, the city forcibly relocated the dancers to the nearby shrine of St. Vitus, who people believed had power over dancing. There the dancers were given crosses and red shoes and forced to walk around a wooden effigy of the saint in supplication.

This strange episode continued into September when suddenly the dancing ceased. Chroniclers were rightly baffled at the sudden mania and its disappearance, perhaps fearing that it could reoccur without warning. Yet, no such event befell the city again; at least, none in such large numbers.

The Dancing Plague of Strasbourg remains a mystery to historians. Some doubt that it even occurred, although the general consensus is that it did, given the ample sources chronicling the event. This bout of unrestrained boogying almost certainly did happen, although debate remains over just how widespread and deadly it was. No contemporary source records any deaths, though later ones insist that there were. Moreover, there is disagreement over the number of dancers involved, with low estimates running at 50, while the higher end records 400.

Now to the most important question: what caused the dancing? Demonic possession was a popular theory among the religious, though that has since fallen out of fashion. Since then historians have attempted to provide rational explanations for this irrational behavior. The go-to explanation for inexplicable behavior for many scholars is fungus, specifically, ergot. This fungus often attaches to grains and is the primary substance used in the hallucinogenic drug LSD. While plausible, ergot is usually blamed for all kinds of strange behavior, regardless of type, or outward physical signs, and some historians claim that the demonic visions and activity in Salem, Massachusetts were fancies caused by this fungus. Given how geographically-dispersed these were and the wildly different behavior it caused, dissident critics bemoan how ergot is used to rationalize widespread outrageous behavior for which historians have no reasonable theory. One camp of historians claims that the dancing plague was an example of mass hysteria, brought on by the trauma of famine and disease, particularly from novel diseases brought over from the newly discovered Western Hemisphere, such as syphilis, of which Europeans had never encountered before. Still other historians argue that the Dancing Plague was the product of a mysterious religious cult, whose activities and motives remain unknown to this day.

We may never know what overcame the people of Strasbourg, nor those other afflicted peoples throughout the medieval period. These bizarre occurrences are just as weird and indefinable to us in the present as they were to those who experienced them.